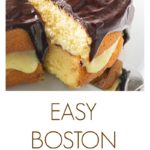 Boston Cream Pie is a special dessert recipe made a bit easier with one shortcut. The pastry cream that goes between the layers is homemade from pure ingredients and the chocolate ganache is classic simple goodness. The cake layers are made from a box mix, carefully chosen for suitablity to this recipe.

No, it’s not actually a pie. It’s a cake. A bit of research reveals that it is a remake of an early American recipe known as “pudding cake-pie”. Pie pans were more common in the 1800’s than cake pans, and that is probably where the name came from.

The owners of the Parker House Hotel in Boston claim that in 1881 one of their chef’s created the first “Boston Cream Pie”. It was declared the official dessert of Massachusets in 1996.

Our version of the Boston Cream Pie

There are many variations, but the basics are the same: A two layer, buttery, spongy vanilla cake with a creamy custard in the middle and topped with chocolate ganache.

You can definitely go the super easy route with a box cake and box vanilla pudding for the custard. But we felt that making the custard from scratch resulted in a far superior taste, so we opted for that, along with homemade ganache (because it’s easy anyway).

Traditionally Boston Cream Pie is made from one cake layer which has been split horizontally. That makes a smaller cake, but go that route if you like. We made two layers and then trimmed off the highest part of the “dome” to make the layers a bit flatter.

It is a bit of a delicate process, but with our tips and recipe you can be sure it will be delicious and perfect.

THIS RECIPE MADE OUR “BEST OF THE YEAR” LIST. THE OTHERS CAN BE FOUND HERE. 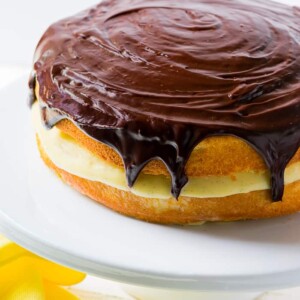 Any buttery yellow cake can be used, and if desired, one layer can be split horizontally to create two layers.
Tried this recipe?Let us know how it was!