This barbecue shrimp salad is a fresh way to use those lovely southern summer ingredients: shrimp, corn, cucumbers, and those infamous Vidalia onions.

Summer is here! Well, officially summer doesn’t begin until the 21st but I’m a teacher so as far as I’m concerned if school is out, summer is upon us!

Summer means several things to me, though, in addition to the end of the school year. It also means barbecues with friends and families and light meals filled with fresh local ingredients. Here in Georgia, our summer favorites are corn, cucumbers, shrimp, and Vidalia onions.

I’ve combined these favorites to bring you a delicious yet simple salad full of those southern flavors: Barbecue Shrimp Salad.

The main event of this salad is the shrimp. Shrimp season began last week in Georgia so I can think of no better time to get to the coast (Darien, GA if you’re smart) and try some of the freshest shrimp you can get your hands on.

Another light dish that we make with shrimp is our Greek Style Flatbread Pizza. Be sure to check that one out too.

For our Barbecue Shrimp Salad, I made a simple marinade (which doubles as the dressing) from barbecue sauce (Sweet Baby Rays is my favorite), olive oil, red wine vinegar, and cumin. I marinated the shrimp in this mixture before skewering and grilling them.

The next star of this dish is the Vidalia onions. Never heard of them? These onions are unlike any others. Named for Vidalia, Georgia, a small town in the Southern part of the state, they can only be grown in the surrounding areas.

The low amount of sulfur in the soil in this region make the onions distinctively sweet, which is why they are so treasured. In this recipe, we skewered the onions and brushed them with a bit of the marinade/dressing and then grilled them until the onions were soft and the edges charred.

The final steps are grilling the corn until it has a nice char, slicing the kernels from the cob, slicing the cucumbers, and tossing all the ingredients together with spring mix lettuce. There you have it – Barbecue Shrimp Salad!

Drizzle the remaining marinade over the salad or try it with Barbecue Salad Dressing and you have a light yet delectable dinner made from the best ingredients Georgia summers have to offer.

If you’re here it’s because you love a light summer salad, so you’ll want to check out this Summer Salad with Peaches, Blackberries & Basil Vinaigrette. 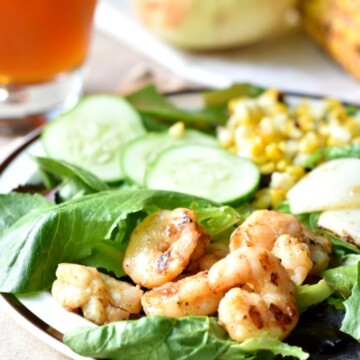 Looking for more grilled recipes? Check out these!