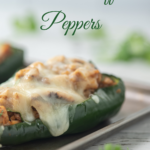 By making the Spanish-style rice and shredded chicken ahead of time, this recipe comes together in a flash. It’s beautiful, full of flavor and is all you need for a complete meal!

Doesn’t it seem like peppers were just made for stuffing? I swear that if we weren’t supposed to fill up that perfect single-serving sized pepper half with delicious stuffing then I just don’t know why it’s there.

We stuffed these with a delicious mixture of Spanish-style rice, shredded chicken, onions, garlic, cumin, chili powder, lime juice, and cilantro and topped with with creamy Monterrey Jack cheese, but there are so many ways to adjust it to fit your tastes.

Check out my suggestions below!

With the chicken and rice cooked ahead of time (see the next section for my secrets for making this in no time at all!), this recipe comes together really easily. While you’re preheating the oven, slice the peppers in half lengthwise and clean out the ribs and seeds.

Then, heat up the oil in a small skillet and cook your onions and garlic. Once the oven is preheated you can pop the peppers in cut side up to pre-roast them before stuffing.

While they’re roasting, mix together the rest of the ingredients (be sure to save half the cheese for putting on top!) and you’re ready to stuff! Divide the mixture evenly between the peppers and top with the remaining cheese.

Put them back in the oven until the cheese is melted and the stuffing is hot. Serve them right out of the oven and enjoy!

Tricks for making this recipe a snap

The recipe calls for Spanish rice, which means you can make it with a box rice, or even Ready Rice that you just heat up in the microwave! Of course, if you’re feeling super fancy you can always make Mexican Rice from scratch.

Another hack I use with any recipe that calls for shredded chicken is buying the pre-shredded rotisserie chicken in the deli at the grocery store.

Ended up with extra stuffing? It doubles as a chicken burrito bowl for lunch tomorrow!

These peppers are super versatile. You can really stuff them with anything that has a Southwest or Mexican-inspired flair. Here are some ideas:

Is it better to parboil peppers for stuffed peppers?

How do you keep stuffed peppers from getting soggy?

Poblano peppers hold their shape really well, so as long as they’re not overcooked that shouldn’t be a problem. If you’re reheating them, I would opt for the oven over the microwave to ensure that they don’t get soggy.

What are the best peppers for stuffing?

We love poblanos but bell peppers are also perfect for stuffing. The key is to get a good firm pepper that will have a flat surface to lay on while baking and enough room on the inside for all the filling.

Do you have to peel poblano peppers?

I don’t peel mine! If you’re roasting poblanos until soft and then dicing them up into a dish I would peel them before dicing, but in this case you can just eat them peel and all!

What do you serve with chicken stuffed poblano peppers?

This recipe is actually a pretty all inclusive meal since you have your meat, grains, vegetables and dairy all in the peppers, but I know sometimes we just want a little variety on our plates. I think these would be delicious with Smoked Queso Dip, esquites (Mexican corn salad), a cup of cheesy roasted poblano pepper soup or black bean soup, and of course a cucumber jalapeno margarita to wash it all down.

Sara
By making the Spanish-style rice and shredded chicken ahead of time, this recipe comes together in a flash. It's beautiful, full of flavor and is all you need for a complete meal!
5 from 5 votes
Print Recipe Pin Recipe
Prep Time 5 mins
Cook Time 30 mins
Course Main Course
Cuisine American, Mexican
Servings 6 people
Calories 389 kcal

Bell peppers can be used instead of poblano peppers.