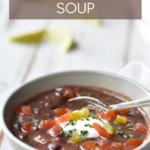 Black Bean Ham Soup is a great way to use leftover ham, but the meat can be left out for a delicious vegetarian version.

This recipe for Black Bean and Ham Soup makes a hearty soup that’s just perfect for cool weather. We always make it after Thanksgiving, Christmas and Easter when we’ve made smoked ham on the Big Green Egg.

A super versatile recipe for soup

Versatility is one of the reasons we love it. Leftover ham gives this soup an extra layer of flavor and makes it even heartier, but it makes a mouthwatering vegetarian version too. You would just substitute veggie stock for the chicken stock and leave out the ham.

Butternut Squash Soup would be made all veggie the same way.

Another great recipe if you’ve got leftover ham is Ham and Potato Frittata.

Besides the ham you can easily adjust the amount of spice according to your family’s preference. If you’ve been around Biscuits and Burlap for any length of time you know that we love some heat in our food.

We realize, though, that not everyone feels that way, and it’s simple enough to tone down the kick, while still keeping all the yummy flavor.

Bean with ham soup is so pretty…

Okay, that’s a joke. Truthfully, it’s another one of those tastes-great-but-not-so-pretty brown foods. It’s difficult to photograph and make it look as good as it tastes – just like Iron Skillet Hot Fudge Pudding Cake.

So, either we enjoy challenging our photography skills, or maybe we just like to eat good tasting food, regardless of how it looks.

Garnish is the key for embellishing the looks of our not-so-attractive friend. Here are a few ideas for toppings:

However, if you don’t have time for garnishments, or just plain don’t give a darn, leave them off. You’re probably not going to be taking pictures of yours, right?

It’s still bound to be one of the tastiest bowls of soup you’ve ever had. Who cares that it’s not the prettiest kid on the block. And, do you know what would be perfect with this soup? Sweet Potato Biscuits! They are the best ever!!!!!

Black bean and ham soup is quick and easy

From beginning to end you can have it on the table in under an hour. Don’t you love that?

Of course, if you want to make it ahead of time that’s fine too. When you get ready to eat, just heat it up. Additionally, it freezes quite well. I usually make a pot of it and freeze half for later.

The beans themselves are used to thicken the soup, so no flour or cornstarch to add empty calories. We like to partially mash the beans, giving a nice thick broth, but still leaving plenty of the beans whole for texture.

This recipe will quickly become a staple in your soup choices. Another one you’ll love is She-Crab Soup. It’s almost as easy as this Black Bean Soup. And our Easy Potato Soup is foolproof. Check it out here. 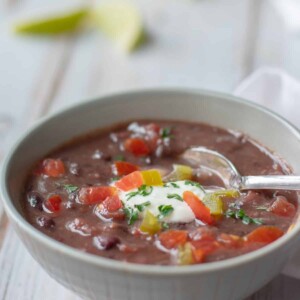 Pam
Black Bean Ham Soup is a great way to use leftover ham, but the meat can be left out for a delicious vegetarian version.
5 from 15 votes
Print Recipe Pin Recipe
Servings 6 people
Calories 296 kcal

Substitute vegetable stock or broth for the chicken broth and leave out ham for a vegetarian version.

Soup and salad are a classic combination and this Salad with Marinated Asparagus and Oranges goes wonderfully with this Black Bean Soup.