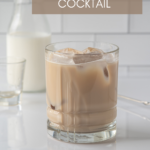 The Smith and Kearns is a creamy but light cocktail perfect for after dinner or as a nightcap. A splash of soda gives it a fun fizzy finish!

A cocktail with a history

When it comes down to it though, don’t they all have a history?

The story goes that this one was created in a bar frequented by two men – one named Smith and the other one Curran. The bar was loud and the name Curran was misunderstood as “Kearns”.

The location of this bar is the subject of more great debate. Some say Edinburgh, Scotland and some say as far from there as North Dakota. Either way it was a happy creation.

I have my own memories of this tasty drink. After a long night of food and drinks at a conference, a very special friend suggested that we order one. I was immediately sold!

It was just the right way to end the evening. Creamy, slightly sweet and with a fun tang from the bubbles of soda this drink was a new favorite.

That special friend is gone now, but I will always think of her when I have a Smith & Kearns. Here’s to you, Roz!

Not incredibly well known, you may have to guide the bartender, but they’ll thank you afterwards. The next thing you know they’ll be making it for their regulars and they’ll be the hero.

With just three ingredients, it’s simple enough and crazy how refreshing a drink it makes.

Make it with coffee liqueur or chocolate

Now, when Roz educated the bartender that first time she told him to use Kahlua, which is a coffee liqueur, so that’s how I make it, too.

However, it appears that the mixology historians all agree that it was originally made with cream de cacao. We’ve written the recipe in such a way that you can use either and they will both be amazing!

When you’re in the mood for chocolate use the cream de cacao and for coffee flavor, use the Kahlua.

Love chocolate and coffee together? You’ll want to be sure and save White Chocolate Mocha to make sometime soon!

Make it with milk, cream, or half and half

The original Smith & Kearns was made with cream, so naturally it was rich and extra indulgent. If that’s your favorite way to describe a cocktail then you should feel free to use cream.

Half and half is a good happy medium and makes an excellent drink. It has some of the indulgence of the cream, but not too much.

We’re always looking for somewhere to cut back, though, and this is the place to do that if you’re like us. We use whole milk in lots of recipes where a richer cream is usually used and it works out fine. Check out this old fashioned Sausage Gravy.

You’ll never miss the cream in it or this S&K. They’re both perfectly divine!

The best way to mix the Kahlua and Cream

You can certainly put both ingredients in a cocktail shaker with a bit of ice and shake vigorously. If you mix it like this, do it fast. You don’t want to dilute your mixture.

We like to stir it with a cocktail spoon in another glass or even your cocktail shaker without the lid on it. The idea is to make sure it’s well blended.

The main thing to keep in mind is that you don’t add the club soda until the end. Those fizzy bubbles are what makes this drink special and we want to preserve them.

Similar to an egg cream, but with booze

Being from the south, egg creams are not a thing in our area. But, we’ve heard all about them, and they do sound tasty.

For our southern friends, an egg cream actually has neither egg nor cream in it, but soda and milk are combined and most frequently chocolate of some sort is added for flavoring. The milk and the soda are the combination that works with our cocktail and with an egg cream.

If you love an egg cream you will most definitely want to give this recipe a try! 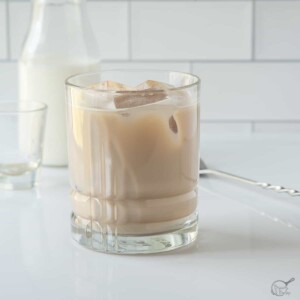 Pam
The Smith and Kearns is a creamy but light cocktail perfect for after dinner or as a nightcap. A splash of soda gives it a fun fizzy finish!
5 from 9 votes
Print Recipe Pin Recipe
Prep Time 3 mins
Servings 1 drink
Calories 246 kcal