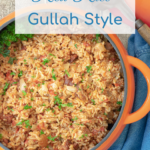 Gullah Style Red Rice is a simple recipe as told by “Maum Chrish” in the cookbook Bittle en’ T’ing’ – Gullah Cooking. This recipe, along with all of the others in the book, are a celebration of the Gullah culture, especially its fascinating language.

This Gullah Red Rice is an astoundingly delicious recipe. Like most all recipes of the day, this one makes use of the foods available in the area. Rice is an integral part of the cuisine of the lowcountry, having once been a major crop there.

Tomatoes are, when in season, abundant and wonderful. The few other ingredients –  onions, smoked meat and salt combine with the rice and tomatoes to create a dish that’s comlex, yet simple too.

Some folks would call this Charleston Red Rice, but we have not tasted or made that version, so we can’t speak to the similarity or differences. If you make it by that name feel free to leave us a comment below with your take on the comparison.

We travelled to the South Carolina Lowcountry

If you follow us by reading our weekly newsletter (you can sign up here) you know that we recently made a trip to Beaufort, South Carolina, and the surrounding lowcountry. The purpose of the trip was to learn about the food culture of the area.

We had a blast eating (and yes, enjoying a few cocktails) and soaking up as much as we could of this unique region.

Naturally, there is a lot of seafood in the local cuisine as there is water pretty much everywhere you look. But, there’s more than just seafood, and this red rice is a great example.

If you find yourself in this area be sure to visit the Penn Center. Formerly the Penn School, it was established in 1862 on beautiful St. Helena Island, and was the first school founded in the southern United States specifically for educating former slaves.

In this case they were the formerly enslaved Gullah people who were left behind when the plantation owners fled the area. After the school closed in 1948, Penn Center’s primary purpose was to safeguard the heritage of a Gullah Geechee community.

In the 1960’s, Penn Center became a symbol of social justice, being the only location in South Carolina where interracial groups, such as that of Dr. Martin L. King, Jr., and Southern Christian Leadership Conference could safely gather in an era of mandated segregation.

Today the Penn Center campus is designated as a National Historic Landmark District, dedicated to the cultural preservation, social justice, and education of the descendants of the Gullah Geechee community. They maintain a museum, cultural center and conference meeting space. It was in The Welcome Center Gift Shop that we found this treasure:

Bittle en’ T’ing – Gullah Cooking with Maum Chrish’ is a “collection of recipes from South Carolina’s Low Country, written in Gullah with English translations. More than a cookbook, it is a tribute to this unique language and to the African-American people whose ancestors used it as a mother tongue”. The title itself, when translated means “Food and Other Things”.

If you love all things Southern Food, including history and the origins of our recipes you’ll want to read Southern Food Then and Now.

A quick search reveals “Gullah, also called Sea Island Creole English and Geechee, is a creole language spoken by the Gullah people (also called “Geechees” within the community), an African-American population living in coastal regions of South Carolina and Georgia. The Gullah language is based on different varieties of English and languages of West and Central Africa. “

To illustrate we’ll give you one paragraph from the recipe in Gullah, and then its translation. Our recipe card below is written up in the more traditional format you are accustomed to seeing.

Maum Chrish’ word of caution about watching the rice for doneness:

“Watch the rice and if it seems to dry out before it is done, add a little water.”

Wanting the final dish to be one you all would love, we did make a few minor changes to the original recipe. Therefore we do not claim this one to be totally authentic Gullah Geechee food. It’s simply inspired by our love for the entire culture, including its cuisine.

Sometime after this post was published for Red Rice we realized what an interest there was in the Gullah cuisine and culture.. So many of you were visiting this post and enjoying the recipe that we decided to add another one from the same cookbook.

You can now find Gullah Style Sweet Potatoes on Biscuits and Burlap as well. It’s a simple dish, just like the red rice, and has only 3 ingredients besides the sweet potatoes themselves.

Many people say that Charleston Pecan Chewies are a Gullah recipe. We’re not positive about that, but they certainly do come from the Carolina lowcountry.

We think you’ll love hearing Maum Chrish’ version of “how many potatoes to dig from the potato bank” as well as our instructions, which are as simple as the recipe itself. 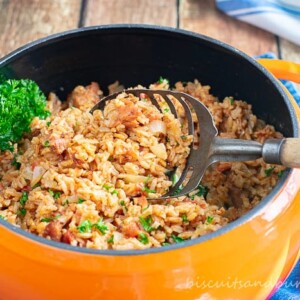 Pam
Red rice is a simple dish of rice, onions and tomatoes seasoned to perfection. This version is inspired by a cookbook of Lowcountry favorites told in the Gullah language and translated into English.
4.5 from 8 votes
Print Recipe Pin Recipe
Servings 6 people
Calories 227 kcal

The next installment in the series on our Lowcountry trip is all about oyster farming and includes a bonus recipe for White Wine Mignonette.

Don’t forget to order your very own copy of Bittle en’ T’ing’ by using this link.

If you love our Guro Cast Iron domed casserole dish as much as we do the link for ordering one of those is here.

Also in the series of posts on our trip to the Lowcountry is a cocktail recipe for “Cathead Cooler. You’ll love this unique and delicious libation!