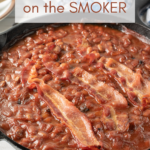 Easy to make smoked baked beans are infused throughout with rich, wood smoke flavor. Cook alongside other dishes on the smoker or alone.

Everyone will love these Smoker Beans with Bacon and they stir up in just minutes. They’re super versatile and can cook at lower or higher temperatures depending on what else you’ve got on the smoker.

How to get that smoky flavor throughout

This is the same method we use with our Smoked Mac & Cheese and Smoked Vegetables as well as Smoked Sweet Potatoes. The idea is to stir occasionally as the dish is cooking on the smoker.

If you just placed the dish on the smoker and let it cook like we do with our traditional Baked Beans recipe you’ll get smoke flavor just on the surface. There’s nothing wrong with that, but for beans that are truly permeated with smoky goodness you’ll need to stir.

Stirring brings different beans and sauce to the surface allowing more of the dish to be exposed to the smoke.

How to make it

We generally follow the same steps as in our Baked Beans that cook in the oven, which are:

These beans had gone on the smoker at the same time as the bbq pork which was cut into small pieces to get more outside “bark”.

Items you may need

As mentioned above we highly recommend using a cast iron skillet. This 10 inch Lodge pan is the one we have.

That’s about it really. This recipe for your soon-to-be-favorite smoked side dish is easy and straightforward.

What to serve your beans with

A favorite of ours is to have them with ham. This Smoked Ham on the Big Green Egg is one of our most popular posts and the beans can cook alongside it perfectly!

It just goes without saying that any self respecting southerner is going to serve baked beans with barbeque pork, right? Of course, they’re also perfect with burgers and any type of grilled chicken. Head over here to check out all of our Grilled Favorites. 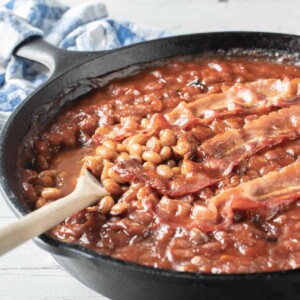 Store bought bacon recipe pieces can be substituted for freshly cooked bacon and the 3 strips left off the top if desired. If bacon is not cooked you can cook the onions in 1-2 teaspoons of cooking oil instead. Beans can be smoked at higher, lower or mid-range temperature depending on what else is on your smoker. Adjust stirring intervals and total time accordingly and cooking only until desired consistency is reached.