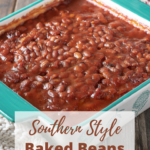 Southern Style baked beans have brown sugar and bacon and will become your go-to recipe. They’re the best you’ve ever tasted!

Well, the answer to that is… I’m not sure. Here in the south most everyone adds bacon to their baked beans and maybe that makes them southern. If it’s Vidalian onion season I would certainly use those and they would no doubt make them southern.

But, Boston Baked Beans are very popular too, and a search through several recipes doesn’t reveal much difference to our southern style ones. To further complicate matters, there is much argument over the origin of baked beans. Some say they’re from South America, some say Europe and some say they’re Native American.

Whatever the case, this baked beans recipe with bacon is the best you will ever try.

Baked Beans go well with what?

To begin with, they are a natural side dish with barbecue of any sort. In fact, we like to add a little Mustard BBQ Sauce to ours, and that really kicks them up a notch and makes it a match made in heaven. If you want a little more smoke in your beans, try our Smoked Baked Beans recipe.

But, baked beans are really great with anything that is grlled or cooked outdoors. Hamburgers, pork chops, chicken, steak – you name it.

Another favorite that dates back to when I was a young girl growing up in the south is ham. Of course, we even cook our ham outdoors. Have you seen our Smoked Ham on the Big Green Egg?

Speaking of growing up in the south, you’ll want to read our article Southern Food Then and Now. It’s a fun look at traditions, ingredients and even a peek into the future.

What kind of beans are actually in this baked beans recipe with bacon?

We do start with baked beans already in the can. If you want to go all out, you can make yours from scratch. This recipe from A Mindfull Mom looks pretty awesome.

While we do use canned baked beans as the basis for this recipe, we highly recommend starting with a good quality. Bush’s Best Original or Homestyle is hands down our favorite.

THIS RECIPE MADE OUR “BEST OF THE YEAR” LIST. THE OTHERS CAN BE FOUND HERE. 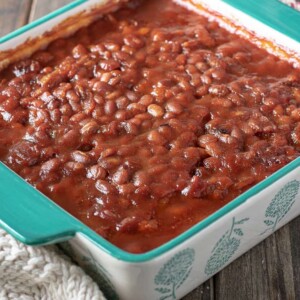 This recipe made the suggested list for the Backyard BBQ Menu Ideas. You’ll want to visit for lots of other recipes as well as tips, tricks and planning help for your cookout.