This spiced apple cider mimosa is the perfect fall cocktail for any occasion. Who doesn’t love a good mimosa?

As soon as that crispness of fall appears in the air, I just can’t help but think of the coming family gatherings. Nothing screams fall like apples, cinnamon and cloves and mulled cider is a staple of any fall gathering in our family. There’s just something about the way the smell of the cider and spices cooking on the stove greets your guests when they walk in that makes any place feel like home.

Our usual add-ins are cinnamon sticks, whole cloves, whole allspice and orange slices or peels. You add this to a full bottle of apple cider in a dutch oven or slow cooker and bring it to a boil. Once the smell of the spices start to fill the air, lower the heat to a simmer and then set out glasses/mugs and a ladle (and a bottle of spiced rum for those so inclined). How easy is that?
Now, if you’re wondering about the mimosa part of apple cider mimosas, don’t worry… I’m getting there.
A few years ago, after my brothers started families of their own, my parents began going down to our beloved St. Simon’s Island for Thanksgiving. We would rent a house in the village and invite whatever family was in town to join us for turkey day. The day is always full of Cajun fried turkey, cornbread dressing, pecan pie, and counting our blessings. The day after, though, has become my favorite part of the holiday.
Our roots are deep on the island and extend from the relatives of both my parents to my sister-in-law’s family and friends of the family. They often have their own thing going on for the day of Thanksgiving, and we always end up with more leftovers than we want to cart back to Atlanta, so why not throw a cocktail party? The apple cider mimosas made their first appearance at one of these cocktail parties that have become tradition.

Have you signed up for our newsletters yet?

All you have to do to make the apple cider mimosas is chill the cider, then put it out in a pitcher with a bottle of champagne or prosecco and champagne flutes. Rim the flutes with cinnamon sugar and let guest mix their own mimosas. Instant fall cocktail!

This recipe made our reader favorites of 2017. Check out the others here. 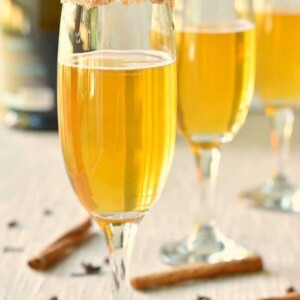 Tried this recipe?Let us know how it was!
What do you like to do with your Thanksgiving leftovers? My personal favorite post-turkey day munchie is these turkey cranberry crostini. They are to die for and always a big hit.

Here are some of our favorite fall holiday staples:

Dadgum it's cold! Even here in Georgia old man win

Please join me in saying HAPPY BIRTHDAY to my blog

We've been seriously bonding with our air fryers.

She Crab Soup! Well, we're going to be honest. Thi

Do you love Mexican Cornbread? How about biscuits?

This marinated chicken has been a favorite around

Raise your hand if you're trying to eat healthier!

Wait!
Sign up here and we'll send you our new posts when they come out.
We'll never send you spam or give your information to anyone else. Click here to read our privacy terms.
28shares