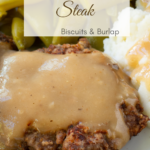 Country Fried Steak is a classic southern dish, and this version is more tender than most. It can be topped with gravy or eaten in all its crispy deliciousness as is.

What is the difference between Country Fried Steak and Chicken Fried Steak?

Nothing but the name really. They are both fried beef steaks which are breaded in the same fashion as fried chicken. In all honesty, when I was growing up Mama called it simply “cube steak“, and it was one of my Daddy’s favorite meals.

All are different names for the same basic, homestyle fried country steak. The butcher has typically cubed it at the store, but you can buy a cubing machine and do it at home.

The indentations left by the machine are little “cubes” and that’s where the name comes from. It’s a method of taking a cheaper, less tender cut of steak and tenderizing it.

Chicken Fried Steak is typically served with gravy and we like it that way too, but it is darned tasty left crispy.

If you want to make gravy you’ll use the pan drippings left behind after the steak is cooked. Then follow our easy recipe for how to make gravy. You’ll then have yourself one classic plate of southern food.

Our favorite cuisine (and maybe yours too if you’re reading this) is detailed in Southern Food: Then & Now. Be sure to check that out too.

This one is actually a tip that came from my mother-in-law. She is the guru behind one of our top recipes around here – Cornbread Dressing (Southern Style), so you know she’s an expert in this stuff.

Rather than picking up steak in the meat department that has already been cubed choose your own. It doesn’t have to be an expensive cut – we like sirloin best of all, but you could go with something even more affordable, like round steak.

Then ask the butcher to cube it, one time. If you don’t specify they may run the meat through the cubing machine twice, resulting in steak that’s almost falling apart. One time through is absolutely perfect!

Does this look like a plate from when you were growing up? You must be our people then. Subscribe for regular updates below.

A few more tips for your country fried steak: 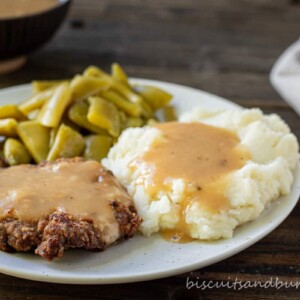 Country Fried Steak is a classic southern dish, and this version is more tender than most. It can be topped with gravy or left crispy.
4.74 from 15 votes
Print Recipe Pin Recipe

For best results, do not crowd steaks in pan, but leave a little space between each one.
Tried this recipe?Let us know how it was!