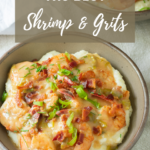 Shrimp and grits is a low country classic and this version is a family favorite. You’ve never had grits this creamy!

To say that the dish shrimp and grits has gained popularity in recent years would be a huge understatment. It’s a lowcountry classic that has found its way into kitchens and fine restaurants the world over, and with good reason. It’s a wonderful layering of flavors that appeals to all.

The origin of this shrimp and grits recipe

In every way imaginable this is my own recipe.  I have made it many times, refining it over the years. When it was time to document the ingredients and instructions for an official recipe I had to carefully make notes and measure.

Sara, who is my partner on this blog, (and my daughter) told me to be sure to share that she refuses to order shrimp and grits in a restaurant because she knows it will never measure up to mine.  I guess all kids love their Mama’s cooking, but I’m just telling you what she said.

How to make the creamy grits

Heat the half and half just until it starts to boil and then stir in the grits. Bring back to a boil and then reduce heat to simmer.

A good sturdy whisk is a tool you don’t want to be without when cooking a pot of grits.  It is worth its weight in gold for getting out lumps.  Cover and cook 6-7 minutes, stirring occasionally.  When the grits are done, stir in the cheese and red pepper.

For the cheese I like to use a good sharp white cheddar.  Yellow is fine too, but I prefer to keep the grits a clean white color if possible. Another great option is to serve the shrimp over Gouda Grits with Cajun Spice. We love it both ways!

Cayenne pepper is of course, an ingredient you can adjust to your taste.  I like to use enough to give it a small kick, but not overpower. There is something magical to me about the flavor combination of cayenne and cheddar.  Think cheese straws…. yum! Our recipe for those are here.

Another fun, seafood appetizer is Smoked Fish Dip. It stirs up in just a few minutes and will bring back memories of your favorite beach bar.

After the grits are done you can keep them on warm if you’ll be serving fairly soon.  Otherwise, remove from the heat and reheat right before you eat.  Just be prepared to stir like crazy and add a bit of water to reach the right consistency.

About the shrimp, the bacon and more:

I like to allow about ⅓ lb. shrimp per person, but honestly this shrimp and grits is a rich recipe, so ¼ lb. is probably plenty, unless you’re serving football players.  We’re starting out here with shelled and deveined shrimp. I use this handy little tool.

I season my shrimp lightly with Creole or Cajun Seasoning.  This Tony Chachere’s Original Creole Seasoning

is our family favorite.  It is pretty salty, so keep that in mind as you shake it on. If you love Cajun Seasoning you’ll also want to check out our Fried Oyster Po’ Boys. Yum!

While the shrimp is soaking up all that goodness, cook the bacon.  The easiest way to end up with bacon “bits” is to cut it before you cook it. Lay the slices on a cutting board and cut with a sharp knife into small pieces.

When you put it in the skillet and break it up, the heat hits and it cooks up very nicely. When browned, remove the bacon bits from the pan with a slotted spoon and put on paper towels to drain.

Drain off the most of the bacon grease.  Leave a little in the pan, and try to leave that brown goodness at the bottom.

Cook the shrimp in the same pan, using that little bit of bacon grease.  The amount of time is going to be determined by the size of your shrimp, but I caution you to stand over the shrimp and watch them very carefully so they don’t get overcooked and tough.

I’m speaking from the experience of a person who does not like to stand idly EVER.  Don’t get distracted.  About 2 minutes per side is a good rule of thumb.

Remove the shrimp and set aside while you go on to the next step.

Making the sauce for the shrimp and grits

Saute’ the green onions and garlic in the pan until slightly limp, then remove and set aside.  Deglaze the pan with the broth and wine.  My preference is a mixture, but if you only have broth that would be fine. Likewise, all wine is perfectly good too.

Add a little more of the Creole Seasoning

and then thicken slightly with about 4-5 shakes of Wondra Quick-Mixing Flour, if you have it available.  I don’t like the sauce to be as thick as gravy, but just give it a little “body”.

If you only have plain flour, dissolve about a tsp. in ⅓ cup water and stir into your sauce and simmer a few minutes. I also use this Wondra Flour in my succotash side dish when I make the creamy version. It thickens without lumps! Order yours here.

Add the shrimp and onion/garlic mixture in just long enough to heat.  You don’t want the shrimp to cook anymore.

Plating the shrimp and grits

Boom! Divide the hot grits evenly onto four plates.  Top with the shrimp mixture, bacon and the reserved green onions.

If you love shrimp and you love southern style food you’ll want to make Classic Southern Style Fried Shrimp too. It’s so many easier than you think.

Southern Food Then and Now is all about traditions, regions and the origins of our favorite cuisine! Shrimp and Grits — The Only Recipe You Will Ever Need