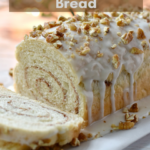 This Cinnamon Bread is easy enough for a beginning bread maker. It makes the perfect addition to your breakfast or brunch any weekend or holiday morning.

This Cinnamon Bread recipe is another one from the family cookbook. I’ve been on a roll sharing those recipes and y’all seem to like them so I wanted to share this one too.

Just a few weeks ago we had Daddy’s Cheese Ball with Pimento Cheese, and earlier was Apple Pie Like Mama Made and Aunt Mildred’s Foolproof Brownies.

The cookbook says that this recipe came from a 1982 edition of Southern Living. I made just a couple of small tweaks to the original recipe, but it is largely the same.

From the other side of the family, but equally delicious is Buddy’s aunt’s Hot Fudge Pudding Cake and we made it in an iron skillet. Yum!

This recipe is one of the options to make from a basic yeast bread dough recipe, and it uses only half of the dough. It makes a fairly small loaf, so it’s perfect if you have just a few people, but you can certainly make two if you have a bigger crowd.

I made Parmesan Crescent Rolls with the other half of the dough. Check that recipe here.

After mixing the dough the recipe states you can cover and refrigerate it for up to five days before shaping, letting rise and baking. I tried it, and it worked just fine.

It took a little longer for the bread to rise, but I think that’s because it started out cold, but it still turned out delicious. What a great way to spread out your bread baking. I’m all about using my time efficiently.

If you like quick breads that are made without yeast, you’ll want to try Hummingbird Bread and Blueberry Orange Bread.

We love nuts – especially pecans. If you don’t believe it, just looks at all the great pecan recipes we have on our site. Classic Pecan Pie is another old family recipe, Ritz Carlton Lodge Inspired Spiced Pecans have been hugely popular, If that’s not enough for you we’ve got a whole collection of recipes in one place that use pecans in everything from salads to main dishes.

But, not everybody loves them like we do, and then some people are allergic. You can always make this cinnamon bread without the pecans on top and it’s plenty scrumptious.

I mean seriously. Look at the icing drizzling down the side of the loaf. Cut a big hunk of this stuff, warm it up and schmear with some butter. A little slice of heaven on earth.

The original recipe calls for the cinnamon bread to be sprinkled with raisins in the cinnamon swirl. We’re not big raisin fans, so I left it out, but if your family loves them, go for it.

If you’re putting together a menu for breakfast or brunch you’ll want to also take a look at Gouda Grits with Cajun Spice.

Things to love about this cinnamon bread

This recipe made our reader favorites of 2017. Check out the others here.

Easy enough for the beginning bread maker this small loaf uses only half the dough. Make two loaves or use the other half for another variation.
5 from 5 votes
Print Recipe Pin Recipe

I hope you enjoy making this Cinnamon Bread and sharing it with your family or friends. Leave a comment if you have questions or let us know if you make it and love it. And remember to #biscuitsandburlap with photos on Instagram or tag us on Facebook.

How about trying something totally new? We learned all about making bialys from a guest chef and you can too, by clicking here.

Other Recipes You’re Going to Love