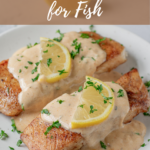 Cajun Cream Sauce is full of flavor and easy to make. It’s the perfect topping for fish that has been pan fried, blackened, baked or broiled. Starting with the pan drippings left behind gives it a zesty, seafood foundation.

Cajun Cream Sauce adds a little decadence and a lot of flavor to any fish. Put it over blackened or Cajun seasoned and pan fried fish and you double the punch of flavor. Add it to a more subtly seasoned fish and it soars to new heights of excellence.

What kind of fish is best to top with Cajun Cream Sauce?

Any type of firm, white-fleshed fish will be awesome topped with this tasty sauce. Our personal favorites are snapper, grouper and flounder – not just for flavor, but because they’re easy to handle when cooking.

Catfish would be so good too, and it’s an often misunderstood fish, thought of in many areas only when it’s fried. We wrote a whole post that includes a recipe for Catfish with Lemon Thyme Sauce – a mild, sort of sophisticated twist on sauce for fish.

The foundation for creamy Cajun sauce

The Cajun cream sauce is very similar to the one we made for our Pork Chops. In that case we called it a Cajun Pan Sauce. It really just means that you’ve made your sauce in the same pan the protein was cooked in.

The little bits of flavor left behind are what flavors the sauce. If baking or broiling the fish you’ll want to keep it warm and use the drippings from your baking pan.

Another, more down-home name is gravy. Here in the south gravy is the name you’ll hear most often for sauces with their roots in pan drippings. If you ever wanted to know how to make a Basic Gravy we’ve got you covered on that too.

The basic steps for making the sauce

Love all things Cajun like we do? This Best Jambalaya Recipe is so good because the guesswork for getting the rice done just right is gone! Perfect Jambalaya every time.

And Cajun Baked Chicken uses bone-in chicken and will be on your table with minimal effort! 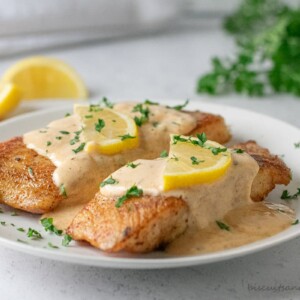 Cajun Cream Sauce is full of flavor and easy to make. Starting with the pan drippings left behind gives it a zesty, seafood foundation.
5 from 17 votes
Print Recipe Pin Recipe

Love Creole/Cajun recipes? So do we.